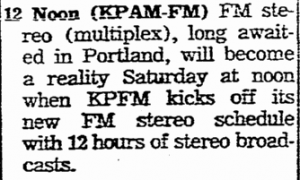 KPFM, Portland’s first FM multiplex stereo radio station, and at the time one of only twenty in the country, began broadcasting at noon on Saturday, December 16, 1961 (The Oregonian, 16 December 1961).

The Oregonian explained the new technology:

In its simplest terms, FM stereo is the broadcasting of two signals over one channel from the station. In the FM stereo receiving set, the two different signals are put through a dual amplifier and fed into separate speakers for reconversion into sound.

FM stereo is full compatible and owners of conventional FM sets will hear broadcasts monoaurally just as they always have but will not hear them in stereo.

The first show FM stereo program broadcast was “Introduction to Stereo” with Don Vincent, Art Gilmore and Tom Mercein hosts. It included sound effects, music and commentary. It was followed at 1pm by the album “Victory at Sea,” Vol. III. “Pass in Review,” the sound effects of a parade presented in London’s Phase 4, was scheduled at 3pm.