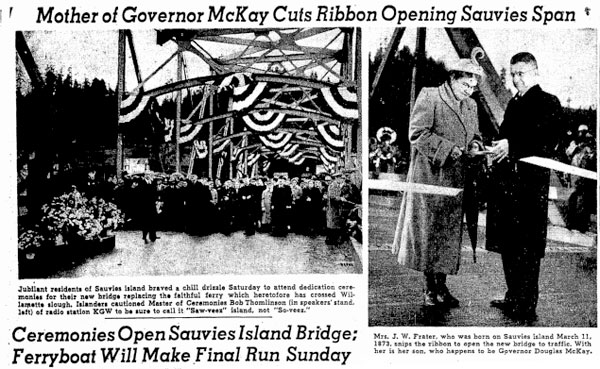 The Sauvie Island Bridge, the first physical link between the island and the mainland in the island’s history, was officially opened with a ceremonial ribbon-cutting at noon on Saturday, December 30, 1950 (The Sunday Oregonian, 31 December 1950).

Sauvies islanders Saturday dedicated the new bridge which has ended their 100-year isolation from the mainland.

Mrs. J. W. Frater, mother of Governor Douglas McKay and early day resident of the island, cut the ceremonial ribbon to open the bridge to traffic.

Governor McKay, who lived on the island as a boy, in a dedicatory speech called the $900,000 bridge one step in a giant building program which will be necessary to put Oregon’s highway network in the shape to meet the demands of the state’s increased population and industrial growth.