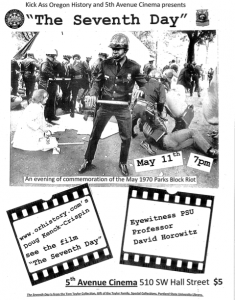 Labeled by some in our current era as “The FIRST Occupy Portland,” The Seventh Day was made by Portland State University students, with the help and guidance of the university’s Center for the Moving Image, during the student strikes that erupted on college campuses across the nation in May of 1970. PSU’s campus became the site of a violent confrontation between the Portland police and protesters that sent over 30 to area hospitals. The events leading up to, and the melee itself are all chronicled in this important film. The Oregonian film review of June 5th, 1970 called The Seventh Day “an excellent film about a truly historic event in the history of our community.” My guess is 42 years later, this statement is even more true.

A virgin 16mm copy of the film from the Tom Taylor Collection, Gift of the Taylor Family, Special Collections, Portland State University Library, will be shown. The film’s context will be laid out by orhistory.com’s enthusiastic Resident Historian, Doug Kenck-Crispin. Witness to the 1970 riot, PSU history professor David Horowitz, will speak, and Josh Feinberg will provide live sitar music – no joke!

Admission is a mere $5, and beer and wine will be available. The show begins at 7 p.m.