Holy crap what a weekend – the only thing this weekend lacks is fireworks!

The Kicking + Screening Soccer Film Festival, an annual series of events that bring together soccer and film enthusiasts to celebrate the beautiful game, touches down in four cities this year: Liverpool, New York City, London, and Portland, Oregon. . .

On Thursday and Friday films, including Argentina Futbol Club, Loucos de Futebol Gringos at the Gate, A Most Improbable Life, and [more]

El Grito refers to the battle cry of the Mexican War of Independence. The event is remembered and celebrated each year on the night of September 15. [more]

“Over the past six years, support of the Slabtown Community Festival has been tremendous. The neighborhood came together, participating as volunteers, merchants and festival-goers.” [more]

A rare bright spot for the Timbers this season has been their play against the Cascadia rivals, Seattle and Vancouver – two wins and one draw – a win Saturday would go a long ways toward securing the Timbers’ first Cascadia Cup since 2010, and first ever against all three rivals in MLS.

Portland Mini Maker Faire is a two-day, family-friendly showcase of creativity and cool technology, and a celebration of the Maker movement. It’s inspiring, stimulating, and fun for all ages.

Maker Faire is a weekend filled with an incredible variety of exhibits, talks, demonstrations, and performances bridging arts, crafts, science and engineering—many of them hands-on and all of them engaging. Maker Faire, presented by Intel and MAKE Magazine, is a reflection of our community at its very best. [more]

Join the Portland Gay Men’s Chorus and dozens of other LGBT organizations for a day of music, fun, and information in Portland’s living room. Meet other members of the community and learn all about the various organizations and teams throughout the Willamette Valley. Whether you’re gay, lesbian, bisexual, transgender, just out, considering coming out, or an ally to the gay community, it’s guaranteed to be a wonderful event. [more] 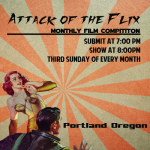 Attack of the Flix #9

Attack of the Flix, presented by Microflix, is a monthly competition for Portland filmmakers held at the Curious Comedy Theatre (5225 NE MLK). This month’s show takes place Sunday, September 16, 2012.

“One Flew Over The Cuckoo’s Nest” 50th Anniversary Party

Join the Kick Ass Oregon History crew and the fine folks from Nestucca Spit Press on Sunday, September 16, 2012 as they present the “One Flew Over the Cuckoo’s Nest” 50th Anniversary Party at Mississippi Studios (3939 N. Mississippi) – the celebration begins at 7:30 p.m. [more]