The world poutine-eating championships being held Saturday in Toronto – as a high-cal appetizer to a Toronto FC soccer game – are as good a sign as any that Quebec’s down-home artery clogger has finally arrived on the international stage.

Chicago, San Francisco, and of course New York; you can find poutine in more and more places throughout the world. And Portlanders may have more poutine choices than any other city not in Canada. I spoke to Mr. Allemang about my, and Portland’s, poutine obsession for the article.

In Portland, Ore., there are at least a dozen locales that play to poutine cravings, including the Potato Champion, which boasts of being the city’s only late-night French-fries cart and tempts homebound drinkers with vegetarian and even vegan poutine, as well as the standard version made with free-range chicken stock and artisanal curds.

How does an Oregon city come to be a force in the dish’s globalization? “There’s a big foodie culture here,” says software engineer David Strom, author of the Portland Poutine website. “There’s also an irony addiction in Portland. In the end, poutine’s the perfect junk food. … You’ve got gravy, you’ve got French fries, you’ve got cheese – what’s not to like?”

Mr. Strom traces his passion for poutine to a visit he made to Montreal in 2005: The motto of his website is “We have much to learn from Canada.” Montreal’s reputation as a lively tourist destination is in large part responsible for poutine’s rise in the food world.

Read the rest of the article for more on poutine’s march around the world.

This story was cross-posted on PortlandPoutine.com. 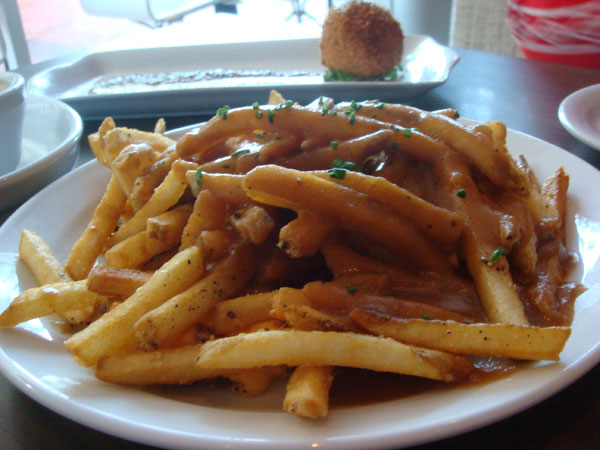 I am proud to announce that Portland Poutine has published it’s first poutine review (by yours truly!). Heather and I made a special trip to The Original: A Dinerant two weekends ago to try the poutine, and we were not disappointed. Here’s an excerpt from the review:

We arrived on a lazy Sunday afternoon to take advantage of the Original’s every day happy hour (3pm-6pm, until 8pm at the bar). Four bucks for a platter of poutine is a great deal! It was such a great deal we also ordered the scotch egg with mustard, and the pigs in a blanket made with a kobe beef frank and served with cheddar fondue(!).

Read the whole review: The Original: A Dinerant

And below, enjoy a bonus photo of that kobe beef pig in a blanket with cheddar fondue mentioned above. 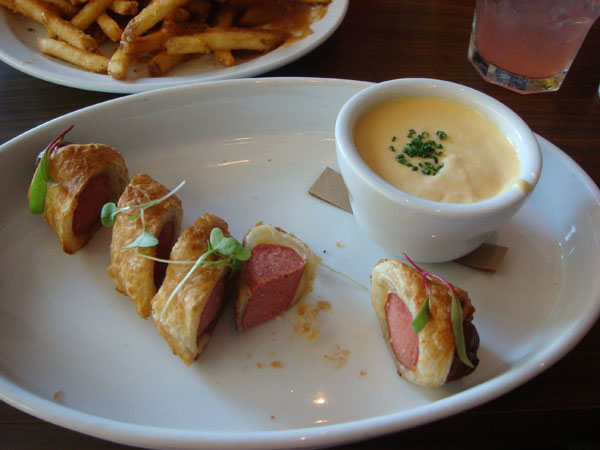 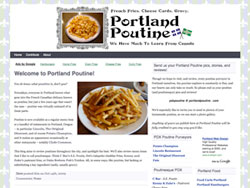 French fries. Cheese Curds. Gravy. We have much to learn from Canada.

The perfect beer accompaniment and late night stomach filler’s popularity continues to grow in Portland. Just two years ago it was difficult (though not impossible) to find, now numerous restaurants in Portland serve poutine.

I’ve blogged about poutine quite a few times over the past couple years. I’ve come round to thinking poutine has staying power; there’s always room for more choices in the American junk food pantheon. As more and more restaurants in town start offering the dish, I figure the aficionados like myself need a Portland Hamburgers-esque place to share our thoughts, reviews, photos, and enjoyment of the French Canadian delicacy.

So, with the help of Heather of Mile73, I present to you: Portland Poutine.

Priming by way of biere. 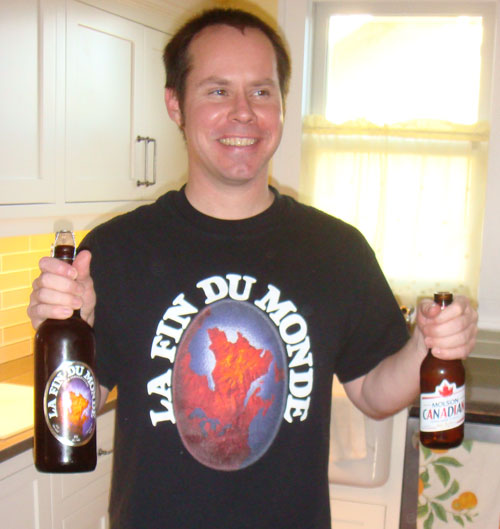 END_OF_DOCUMENT_TOKEN_TO_BE_REPLACED

Update: If you’re looking for Poutine in Portland, check out our new site: Portland Poutine! 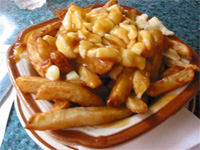 With the Coupe Grey in Montreal fast approaching, this seems an opportune time to revisit my favorite French-Canadian invention: poutine!

Over a year ago I beseeched the blog readers of Portland to reveal to me the location of poutine in Portland.
And the bloggers of Portland heard my call! (Well, at least altportland‘s VJ and Cuisine Bonne Femme from PortlandFoodAndDrink.com, and now blogging at Food Carts Portland did.)

Since that time the Florida Room has ceased to offer poutine, but Potato Champion has taken up the call to champion poutine to the people of Portland.

And of course, you have the option of making your own poutine. I buy fresh cheese curds whenever I can find them (Rogue Creamery‘s are available occasionally at the farmers markets), and I have a Québécoise friend who, whenever she makes a trip to her homeland, brings me back cans and packets of poutine gravy. And of course, french fries are easy! Other Portlanders have tried their hand at making poutine too – check out this delicious account, with photos, at Gild the (Voodoo)lily,: homemade sweet potato poutine.