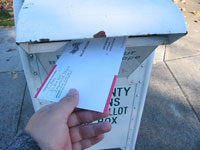 Your two part Voters’ Pamphlet has arrived (if you accidentally recycled it you can find a copy online at OregonVotes.org), and most of us, in Oregon, have also received our ballots.

The editorial board of DaveKnows.org (i.e. me, Dave) convened earlier today to discuss the candidates and ballot measures in the great state of Oregon. After careful consideration the board has come to a consensus and presents to you the following step by step endorsements:

P.s. I’ve already mailed in my ballot, so stop trying to debate me already!

No Portland restaurants made it onto Esquire’s Best New Restaurants, 2008, but Beast (5425 NE 30th Ave) did garner one of the Other Awards:

MOST TOLERABLE EXAMPLE OF THE COMMUNAL-TABLE TREND.

In the regional seasonal utopia that is Portland, Oregon, the community table is exactly that: a way of gathering people for the purpose of sharing an experience. But it isn’t all peace, love, and understanding. From her open kitchen at Beast, chef Naomi Pomeroy keeps a hard line: two seatings for a six-course daily menu “based on what sounds great, right, and true”–in other words, whatever she wants to serve that night. Don’t even think about asking for substitutions.

In related news, Clyde Common‘s bar is recognized by Esquire as one of the Best Bars, but strangely they use a photo of Portland, Maine on the webpage. 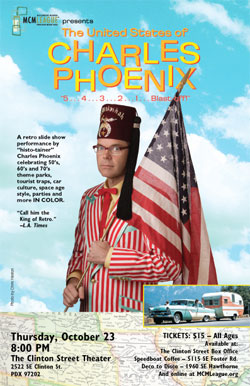 Heather, from Mile73.com, and I made it out last weekend; read her recap and mine.

Hopheads, rejoice! The autumn air is turning crisp, heralding the annual harvest of hops, and with it, the celebration of fresh hop beers by Oregon’s famed craft brewers. Oregon Bounty and the Oregon Brewers Guild have collaborated to host a statewide series of three Fresh Hop Beer “Tastivals,” each featuring more than 20 original fresh hop beers from many of Oregon’s top craft breweries.

Admission is free; the requisite tasting mugs cost $5. Beer tokens are $1 each.

The tentative beer list is available at the Oregon Brewers Guild Blog.

Jonesing for some Timber-centric company?  Maybe thinking a celebration of sorts is in order for the official MLS bid?  Craving some haggis or a scotch egg? Head to the Rose and Thistle (2314 NE Broadway) for merriment, commiseration, argy-bargy, and whatnot with the Timbers Army Saturday night.  7:01pm of course!

Her most recent blog post is Portland: It Really Grows on You

The post is an account of her recent visit to Portland. Of course she comments on the usual suspects; how the city is civilized and livable, the street car, how nice people are, and how there are bikes and restaurants everywhere. But this is the first time I can recall Portland being compared to the City of Light:

You know how people talk about eating their way through Paris? Well, Portland has become that kind of town. There are that many choices for eats and drinks.

It was a quick trip; she only had time to visit Besaw’s, Clyde Common, and Ken’s Artisan Bakery. But she says she’ll be visiting again soon.