And they held an open house on Saturday.

END_OF_DOCUMENT_TOKEN_TO_BE_REPLACED

An article this morning in the Vancouver Sun, Portland draws line, looks at Portland’s approach to dealing with sprawl.

The Urban Growth Boundary worked. Metro Portland’s population (1.58 million) has grown by 50 per cent since 1973, its land area has only grown by 2 per cent. Portland occupies about one-third the area and its population density is double that of Metro Vancouver. Infilling rather than sprawl has been the rule.

Hans Tammemagi looks at some of the keys to making the Urban Growth Boundary work, including a comprehensive transportation network.

And now a statistic unmatched anywhere in North America: from 1996 to 2006 transit ridership increased 46 per cent while automobile miles driven per capita dropped eight per cent! Another spin-off — with huge health-care savings — is that air quality consistently improved from 1990 to 1999 with bad air days decreasing from 11 to only two per year.

As in Europe, bicycling is a way of life with a full 16 per cent of Portlanders commuting on two wheels. Portland was recently named the “most bike-friendly city in the U.S.” But it hasn’t happened by accident. A bill in the 1970s allocated one per cent of state highway funds for bike lanes and paths; the result is more than 435 kilometres of bikeways in the city. And Portland’s education program builds for the future by teaching young people that biking is the preferred way to travel.

The article also examines Portland’s efforts to reduce carbon dioxide emissions, increase the number of LEED-certified building, and the preservation of farmland close to the city. 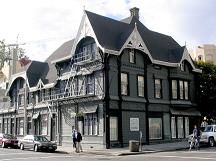 The former neighbor of the dearly departed Rosefriends Apartment building, will be slowly and laboriously moved from its temporary storage place up the street back to Columbia and Broadway.

Starting early in the morning of October 25, Settle Construction, the move contractors, will gently raise the Carriage House off its temporary supports using the hydraulic jacks in the wheel assemblies positioned under it and being the process of moving it back into Columbia Street for the journey back to Broadway and its new/old home.

Friends of Ladd Carriage House will have an information tent in the South Park Blocks adjacent to Columbia Street during the move. Please drop by the tent and pick up more information about the Carriage House and about FOLCH and its parent organization, the Architectural Heritage Center/Bosco-Milligan Foundation.

END_OF_DOCUMENT_TOKEN_TO_BE_REPLACED

According to the LA Times, players around the league are paying bounties to teammates who “posterize” the Portland Trailblazers’ Greg Oden.

Pregame chatter landed, briefly, on the Sacramento Kings’ Kevin Martin, who collected $1,000 from teammate Mikki Moore for a two-handed dunk over 7-footer Greg Oden of the Trail Blazers on Monday in Sacramento.

The Clippers’ Ricky Davis, taking a break from his pre-game dinner, came up with another number. Why be predictable and imitate someone else?

Frankly, I’m not worried. Most of the time going right at Oden is about the stupidest strategy a team could settle on.

Update: Looks like the Oregonian’s Canzano wrote a column about this. The formatting is all messed up on Oregonlive.com right now though.
Dwight Jaynes also blogged about this yesterday: The Clippers put a bounty on Greg Oden.

The festivals are few and far between this time of the year.  It’s getting harder for me to find things to do each weekend.  Being as this is Portland, that’s no problem.  I know where to find plenty of beer and books and coffee to while away the hibernation season.

Nevertheless I know some of my dear blog-readers are not yet ready to hibernate.  This is where I point you to some of my excellent fellow bloggers:

Around The Sun: Free Events This Weekend in Portland: October 24–26

PDX Pipeline, meanwhile, has been doing a great job of rounding up the Halloween-ish events around town.

There is one thing, however, that I hope to check out this weekend. Oregon’s newest distillery, Artisan Spirit (1227 SE Stark), is holding an open house Saturday.