Speaking as a former, and future (come winter), resident of the neighborhood, the new food cart pod opening soon on Mississippi at Skidmore will likely be a great addition to the neighborhood – certainly better than a weed-filled vacant lot. Christened Mississippi Marketplace, the stated goal of the endeavor is to create a vibrant, affordable & high quality place for local food vendors helping to sustain the local food market.

In Saturday’s Oregonian article, Karen Brooks describes the developer and owner of the property, Roger Goldingay, as a former professional soccer player [who] has lived in the neighborhood for eight years and, until recently, owned the John Palmer House across the street. 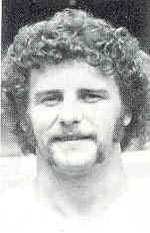 Roger did not, apparently, score any goals, or even tally one assist in his time here, and he even missed the team photo session in 1976, though he does appear in 1975’s. According to Bill Walton, yes, that Bill Walton, Roger Goldingay’s career was derailed by his own teammate who was worried that Roger was going to outplay him and ultimately take his job. I’d like to learn the rest of the story, but Bill Walton does not share it with us.

Roger Goldingay is also an Evergreen alumnus, and somewhat of a renaissance man; he authored the book Never Look Back. Amazon provides a couple awesome excerpts:

We sat in awed silence, metamorphosing from points of light to prehistoric man fascinated with flame. For eternal nanoseconds we flitted back and forth. One moment we were the fire, no more than ethereal flame. Nothing but a flicker of light and everlasting energy. The next moment we sat outside it and saw the flame as God, our beneficiary, our protector from woolly behemoths. In pagan disorder we danced around the fire all night, our hearts racing with discovery

She reached for me and her lips replaced Karla’s. It was the first time I kissed her. It was a deep passionate kiss, the juice of her mouth hot, her tongue exploring. A moment later, I felt Karla kissing my neck, her busy fingers unbuttoning my shirt and rubbing my chest. I reached for her breasts and found them free and loose under her T-shirt. Diane straddled my thigh and rubbed her vee on my leg through our blue jeans.

I’m going to hunt down a copy.