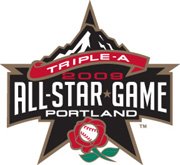 A sellout crowd of 16,637 attended the game between the Pacific Coast League All-Stars and those from the International League — the biggest crowd for this event in 18 years. This wasn’t major league baseball, but it was big-time.

Portland-born Johnny Pesky, who became a fixture with the Boston Red Sox, was among those to throw out ceremonial pitches before Wednesday’s game.

“The setting couldn’t have been more perfect for the kind of an event that parallels the excitement of the movie, ‘The Natural,'” PCL president Branch Rickey said before the game.

The International League beat the PCL 6-5.

The game served as sort of a last hurrah for baseball at PGE Park. The 2010 Portland Beavers played one more season in Portland (with an average attendance of 4265), before the stadium was remodeled to be more amenable to soccer and football. The MLS Portland Timbers and the PSU Vikings now call Jeld-Wen Field home.