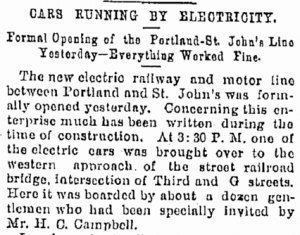 The formal opening of the Portland-St. Johns electric railway line, the first electric line in Multnomah County, took place on Friday, November 1, 1889 (Morning Oregonian, 2 November 1889). The line extended from Downtown, across the original Steel Bridge, and then North to St. Johns.

The construction company, required by its contract to turn everything over in good running order, invited about a dozen gentlemen to take part in the inaugural ride. The men boarded the well appointed car, elegantly furnished in cherry and ash . . . provided with electric lights, which made a beautiful effect at 3:30pm.

In a few minutes the words, “All right; go ahead.” was spoken, when the young man manipulating the lever, turned on the subtle fluid, and away the car sped. It ran rapidly and with scarcely a jar. There was none of the jerky motion so common to the horse, steam or cable car. “How very smooth she runs,” everybody exclaimed when the car got fairly under way and went spinning across the bridge. A few moments delay was occasioned by the swing to and fro of the ponderous draw, to enable a steam to pass through. Then away the car went whirling along. The eastern approach of the bridge was passed, terra firma was speedily reached, and then the electric motor car went “kiting” around the acute curve and shot away down the street toward Albina. After running about a half a mile, another car, upbound, was met a switch. The car coming south was loaded “to the guards” with people of Albina.

The new line, replacing old horse-drawn streetcar lines, would open for regular traffic soon after. The Morning Oregonian writer speculated, presciently, that the enterprise would open up a large section of the country, and will doubtless be the means of rapid settlement on the peninsula.