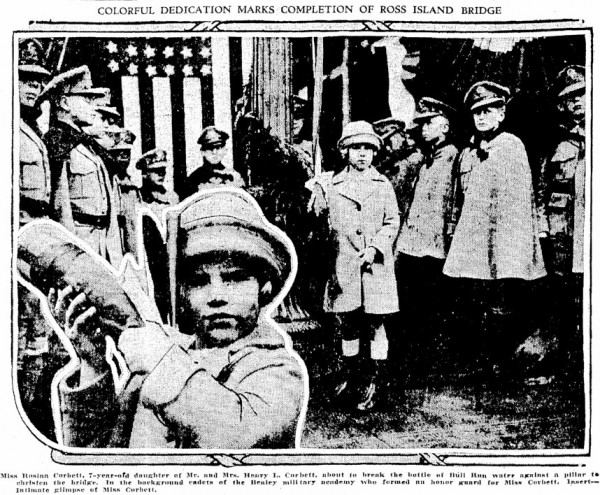 Completion of the $2,000,000 Ross Island bridge, latest to span the Willamette river, and one of the most outstanding examples of the cantilever type to be constructed in America, was acknowledged formally yesterday in a fitting dedicatory ceremony.

From the time the vanguard of a parade, which had formed near Portland’s center, appeared over the crest of the bridge, until little Miss Rosina Corbett deftly broke a bottle of Bull Run water against one of the approach pillars, at once christening the bridge and announcing the close of the ceremony, the throng that covered the east approach of the bridge for fully a block attended earnestly the proceeding.

The Ross Island Bridge was designed by Gustav Lindenthal, who also worked on the Burnside and Sellwood bridges. Over 3,700 feet long, the bridge’s 1,819 foot long truss includes a 535 foot main span and 29 approach spans.