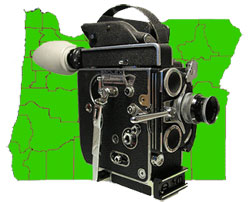 In LA everyone is working on a screenplay. In Portland everyone is an extra and knows Cole Wagoner.

No doubt influenced by the Twitter bubble in which I’m enveloped, lately I’ve come to the realization that Portland and Oregon have a respectable and growing film and video industry. Portland stars in a Gus Van Sant film every few years, television shows like Leverage and Portlandia excite us from time to time, and animation studio Laika is based here. But I’m most interested in the local indie projects, of which there are legion, which I try to feature occasionally on this blog, like the work of local actress Audrey Walker, and filmmakers Mike Vogel and Chris Wilson.

With this in mind, both for myself and for my dear readers, I thought it would be a worthwhile endeavor to round up all the local film and video industry blogs and websites I could find. With an immense amount of help from Portland-based actor Harold Phillips* and filmmaker Mike Vogel, I present to you the fruits of my research:

The Confluence – Bringing together the creative streams of film, television, and media in Oregon…

“The Confluence” blog was created as a place for the Oregon film, television, and media community to come together and share what is going on locally in the industry.

Oregon Film And TV Dollars (work for ALL of Oregon!)

We’re focused on the economic benefit that Oregon’s Film and TV Industry brings to the state. In an era of unprecedented economic woes for the Beaver State, Oregon’s film industry is growing – hiring thousands of workers state-wide and pumping millions of much-needed dollars into our economy.

Oregon Movies, A to Z

Oregon Movies, A to Z began life as a blog kept during the year which preceded the Oregon Sesquicentennial Film Festival at Marylhurst University. Dennis Nyback and [Anne Richardson] co-curated that ten day festival, which focused on expanding the definition of Oregon film to include, not just films made in Oregon, but films made by Oregonians.

OMPA is the largest nonprofit association for commercial, film and TV professionals in Oregon, uniting crew, talent agencies, producers, directors and others who cater to the industry.

As part of an effort to bridge the indie film makers with the actors to bring a sense of cohesion to the Portland film community we have launched . . . www.portlandindiefilms.com. If you are a local film maker and want to have your trailer featured please send us your information.

A place for actors to get the inside scoop from a working casting director. Featuring upcoming castings, workshops, premieres, audition tips, casting nightmares and acting resources. Find out what it’s like on the other side of the audition table!

And last, but not least!

* I’m especially grateful for the help of Harold Phillips, who provided so much information when I asked that I was able to harvest enough for at least another future post. Stay tuned!