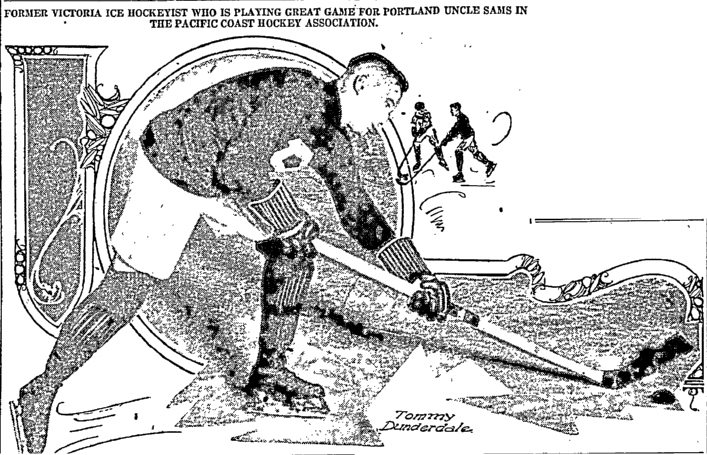 The first hockey game between a team from Portland and a team from Seattle took place on Tuesday, December 14, 1915, when the Portland Uncle Sams, also known as the Rosebuds, traveled North to face the Seattle Metropolitans (Morning Oregonian, 16 December 1915).

“It was a mighty hard game to lose, but we have the opportunity of evening up matters Friday night in the Portland Ice Hippodrome,” said Manager Savage, of the Portland hockey team, on his arrival in Portland early yesterday. His Uncle Sams received a 4 to 2 defeat at the hands of Pete Muldoon’s Seattle ice hockey team in Seattle Tuesday night.

“Up until the last 15 minutes of play we had outskated and outpointed them,” the local manager continued, “and just at a critical moment a penalty weakened our defense. Seattle scored a point and then added another within 15 seconds after the first. We tied it up and then with but four men on the ice wearing Portland uniforms we had two more points scored against us.”

1915 was the Seattle team’s inaugural year in the Pacific Coast Hockey Association. The Uncle Sams, also known as the Rosebuds, joined the league as the first American team in 1914.